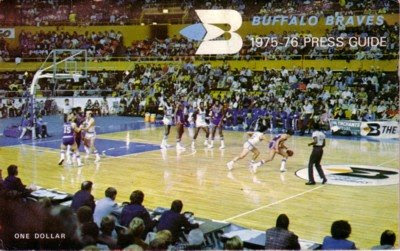 The Buffalo Braves had something of a 400-pound elephant in the room when they considered the upcoming 1975-76 season.

Ernie DiGregorio had tried to come back from his Nov. 1974 knee injury, but wasn't particularly effective. Knee surgeries were much more invasive back then, as the days of arthroscopic surgery hadn't arrived yet. DiGregorio had the summer to rehab, but there were still good-sized questions about his future. He clearly had lost a step in the spring, a step that he really couldn't afford to lose. Would he get it back over the summer? And how would having one of the highest-paid players on the team sit on the bench go over with fans and, more importantly, management?

It was a major problem facing Bob MacKinnon, the team's new general manager. MacKinnon had Western New York ties, having played and coached at Canisius College. He was an assistant coach and scout for the Braves for a while, and then had coached the Spirits of St. Louis of the ABA in the 1974-75 season.

MacKinnon obviously couldn't do a great deal about DiGregorio, and had to wait and see how the guard would be at training camp. His first assignment was to get the roster ready for that camp, starting with the draft.

The first draft-related deal was an odd one; the second was even odder. For starters, the Braves shipped a first-round draft choice in 1975, the 16th pick, to Phoenix for a first-rounder in 1976. Remember, the Braves figured to have a 1974 first-rounder arriving in Tom McMillen, so there was a quality player coming. And Phoenix figured to give the Braves a better pick than number 16 in 1976. However, the Braves could have gotten some help at guard with that pick. Phoenix took Ricky Sobers, who became a starter as the Suns made a dramatic and unexpected trip to the NBA finals in the spring of 1976. Kevin Grevey, Gus Williams, Lloyd Free and Bob Gross also were available.

The Braves then sent a future first-round choice to Washington for Dick Gibbs. That was rather stunning. Gibbs had played in the NBA for four seasons at that point. He had never averaged more than 10.8 points per game. With the Bullets in 1974-75, Gibbs had averaged 3.3 points per game.

What the Braves obviously didn't know was that Gibbs had been having problems with alcohol since high school. Those woes continued through college and into the pros, where he felt overwhelmed. I had a real fear and insecurity of not succeeding,' Gibbs said later. "I always told myself, 'This is my life, this is all I have.' "

Gibbs may have had some good moments on the court with Washington, but he says it was the season that started him on the road to oblivion. "I was out in bars, meeting women, drinking and abusing drugs,‘ he said. I validated myself with women. It was part of my quest to feel good.‘ Therefore, Gibbs wasn't in any shape to contribute much.

Without its first two draft picks, the draft wasn't going to be of much help to Buffalo. No one taken by the Braves ever played a game in the NBA.

The Braves started the season well enough, winning their first four games, but slumped to 9-10 by the beginning of December. Buffalo did put together enough wins to get to 10 games above .500 by the end of January, and stayed right there more or less by the end of the season.

The nucleus of the team was still in place. McAdoo was McAdoo, still unstoppable for the third straight year. He scored 50 points against Cleveland on Nov. 20, and topped it with 52 on March 17 against Seattle. He was even scoring in the all-star game, netting 22 points in 29 minutes. A Sports Illustrated article called him "the quickest tall man, finest shooter and most astounding outside scoring machine ever to play basketball." Bill Russell, then coach of the Seattle SuperSonics and someone who knew more than a lot about basketball said, "He's the greatest shooter of all time, period. Forget that bit about the 'greatest shooting big man.' "

McAdoo's major playmate had become Randy Smith, continuing his path toward becoming one of the most improved players in NBA history. Smith was on his way to averaging more than 20 points per game in a season for the first time in his career. Both men represented the Braves in the NBA All-Star Game this year.

Jim McMillian and Gar Heard were still the starting forwards for most of the season, with Don Adams, McMillen and Dale Schlueter serving as the backups. (Buffalo sent Jack Marin to Chicago for a first-round draft pick early in the season.)

At guard, Ken Charles and DiGregorio were roughly splitting the minutes opposite Smith. That wasn't a good sign for DiGregorio, who still hadn't come all the way back from the knee injury. Bob Weiss was the fourth guard, and Gibbs could play a bit in the backcourt as well. It was pretty clear past the halfway point of the season that the old breakneck Braves weren't coming back, and that these Braves were a little too small to match up with good teams.

MacKinnon tried to change that with a good-sized deal on Feb. 1. He sent Heard and a draft choice to Phoenix for John Shumate, a 6-foot-9 forward/center from Notre Dame.

The Braves clinched a playoff spot with four games left in the regular season. They finished 46-36 to second place in the Atlantic Division of the NBA, thanks in part to the end of the New York Knicks' long run. McAdoo led the league in scoring (31.1), field goals, field-goal attempts, free throws, and free-throw attempts. Somehow, he didn't make the first or second all-NBA teams. Smith did make the second team, and Shumate was picked for the all-rookie team.

The team averaged 10,212 in attendance that season, down a shade from the previous year. That was in spite of the fact that the Braves drew a crowd of 19,226 for a January game with Boston. That remains the largest indoor crowd for a sporting event in Buffalo history.

The NBA had a new playoff format in 1976, and the Braves were involved. They had to play a best-of-three series against the Philadelphia 76ers in an opening round. The games were played within four days. Buffalo opened the series in Philadelphia and broke serve, taking a 95-89 decision. Heading back home, the Braves no doubt figured on winning there and advancing to the next round. Instead, they were clobbered, 131-106, before 12,049.

That brought it down to one game, in Philadelphia. What's more, it came down to the final moments. McAdoo was fouled with the Braves down two points and 17 ticks remaining. McAdoo hit one, and then a fan grabbed the support of the basket and shook it just before McAdoo took shot two. The fan was carted away, but the hoop may still have been moving a bit when McAdoo calmly tied the game with the second of two free throws. Buffalo went on to a 124-123 win in overtime for its first (and as it turned out, only) playoff series win. Here's how all of Game Three looked on TV:


Next up, Boston (sigh). The Celtics still had a powerhouse, with the familiar cast of characters of Dave Cowens, John Havlicek and Jo Jo White. Boston ran off wins in the first two games at home. In the second game, an injured Havlicek was replaced in the starting lineup by Steve Kuberski - who had been signed by Buffalo early in the season and then waived after a month. Kuberski had 12 points in the win. The Braves tied the series at home with two wins, as DiGregorio provided something of an offensive spark and even pushed himself back into the starting lineup.

"Ernie had been playing better as the season progressed, and I think he really got himself psychologically prepared to play against Boston," Ramsey said. "Boston was a good team for Ernie to play against. They played an open style. You got into a running game with them. Their guards were not defensively strong, so it gave him a chance to play at his best. He sparked us off the bench a couple of times, and then he started the last two games of that series. Maybe significantly or maybe not, the games that we won were the games that he did not start."

Those last two games were the last gasp, in fact the last of a three-year run. Boston won Game Five at home, and then closed out the Braves, 104-100, in Game Six. Braves announcer Van Miller fondly remembered those two series with the Celtics in 1974 and 1976.

"It seemed to me in those Boston series, we really captured the flavor of what it's all about in the NBA," he said. "We went into Boston. We were up by 17 points in the first game in '74, and lost it. The Celtics were a great team then, but that to me is the essence of the NBA, and that's when we had it in Buffalo."

Life for the Braves was never the same after that. The storm clouds around the franchise had been developing for some time. In midseason, McAdoo has asked out of an upcoming game because of back problems. When Snyder told him to get a second medical opinion, McAdoo refused ... and was suspended for a game, on Christmas Eve.

Snyder also was involved in a major blow-up with Ramsey. The owner told Ramsey to start DiGregorio, as Snyder thought Ernie D would sell tickets to Buffalo's Italian-American population. The coach, who had absolutely no respect for Snyder's basketball knowledge, told him no. The two sides also argued over a contract extension. It all made a divorce seem close to inevitable. Indeed, Ramsey negotiated with a representative of the Portland Trail Blazers during the Celtics' playoff series.

For essentially the next two years, actual on-the-court basketball in Buffalo took a back seat to off-the-court shenanigans.

For statistics on this season, click here.
Posted by Budd Bailey at 7:24 PM