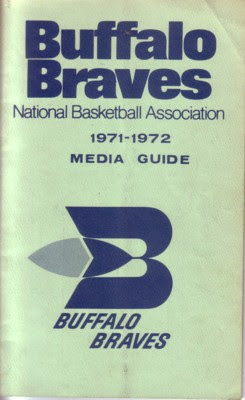 The three newest expansion teams of the National Basketball Association had struggled through their first season, as expected. Now came their reward: the first three picks in the 1971 NBA Draft.

Cleveland had the first choice overall, and opted for Austin Carr of Notre Dame. Carr was the leading scorer in the history of the NCAA tournament at that point. Portland went second and took Sidney Wicks of UCLA, who had won three national championships while playing for legendary coach John Wooden.

That left Buffalo third, and the Braves' pick sent people scurrying to find an atlas.

Kentucky State was located in Frankfort, the capital of the state. What's more, it had a basketball team with not one but two future first-round draft choices on it. The Braves had taken one of them, center Elmore Smith. Travis Grant was a year away.

Smith came with question marks, some about the level of competition, but there was no doubting his physical talents. Smith was 7-feet and averaged 25 points and 24 rebounds per game in college. He also had established a reputation as a dominating shot blocker. Smith figured to be a nice fit for the Braves, who could slide the undersized Bob Kauffman over to power forward.

The Braves were able to sign Smith to a five-year contract, no small accomplishment in the days of the war with the ABA. Carolina had drafted Smith in the first round as well, but the Cougars later signed Jim McDaniels of Western Kentucky (even though McDaniels was Utah's top pick) and didn't offer much competition for Smith.

Some of the nation's best players had come out of the draft pool early because of signing. Artis Gilmore might have been the first pick in the draft by Cleveland, had he not already signed with the ABA's Kentucky Colonels. In fact, Howard Potter, who led Villanova to the Final Four, had signed with an agent during the season. Villanova was removed from the official records of that year's tournament; the second-place team is officially listed as vacated.

The Braves had accumulated three second-round picks through trades. They first went for a guard in Fred Hilton of Grambling. Hilton had an interesting story. He was a top high school guard with a reputation as a shooter in New Orleans. He wanted to go to LSU. However, Pete Maravich was already there, and there was only one basketball. So much for that idea. So off to Grambling. Next up was Amos Thomas of Southwest Oklahoma State. He was followed by Spencer Haywood, who had left college early and had spent one season in the ABA and one season in the NBA with Seattle. The Braves were prepared to argue that since 1971 was when Haywood's original college class was graduating, he should be eligible for the draft. It was a tactic that had little chance of succeeding, and could have been used later in the draft, but it was an interesting approach.

Buffalo didn't take anyone of note in rounds three through six, but in round seven it took a chance on a local player. Randy Smith had been a sensational all-around athlete at Buffalo State, starring on the track, soccer and basketball teams. A tremendous leaper, Smith scored many of his soccer goals simply by jumping above everyone else and heading the ball into an open spot of the net. Still, no one thought the selection was anything but a way to make a local kid feel good. "Randy can't make it in the Little Three, let alone the NBA," a Braves talent scout reportedly said.

"They didn't have any intentions of keeping me," Smith said later. "But I knew I was a good athlete, and I knew I was going to work hard and if I got an opportunity I was going to take advantage of it." On the first day of training camp, according to a later Sports Illustrated account, coach Dolph Schayes sent his team through a drill. Smith was easily the fastest man through it. Twice. "He's fast," Schayes was quoted as saying. "He's staying."

By the way, the draft that year went 18 numbing rounds. The Braves quit after round 17, and their last pick was Joey Meyer, the son of legendary DePaul coach Ray Meyer and himself a future coach.

Donovan also swung into action with a major trade with Atlanta. Figuring that Don May's stock was as high as it was ever going to be after his good 1970-71 season, Donovan dealt him with guard Herm Gilliam to the Atlanta Hawks for Walt Hazzard and Jerry Chambers. Hazzard was a good, veteran guard who had won two national championships for UCLA. His best season had come in 1967-68, when he averaged 24 points per game for Seattle. Now he was coming to the Braves after three good years with the Atlanta Hawks. Hazzard wasn't going to keep the point guard job in Atlanta, not with the heralded Pete Maravich around for a sophomore season.

Hazzard's first action in training camp caused some conversation, even if it didn't affect his play. Hazzard had the regular media members gather around him, and he announced that he had changed his name to Mahdi Abdul-Rahman to reflect his religious beliefs.

There was one other noteworthy change in the roster from 1970-71, at least to those in the legal profession. George Wilson was cut from the team, and sued the Braves. He argued that he was dropped because of a racial quota system and not because of his ability. Wilson, who played for six NBA teams in seven years, lost the suit.

With Smith and Hazzard/Abdul-Rahman added to the starting lineup, the Braves figured to be better in 1971-72 ... and they were. It just wasn't reflected in the standings.

The Braves again went 22-60, the same as the year before. However, Buffalo had stopped playing expansion teams one-third of the time and gone to a more traditional lineup of opponents. In other words, the team played the Boston Celtics six times (0-6), the New York Knicks six times (1-5), and the Milwaukee Bucks four times (0-4).

Loss number one was against the Seattle SuperSonics, a 123-90 blowout at home that didn't sit well with owner Paul Snyder. In fact, the next day Schayes was fired as coach of the team.

"I remember sitting at the press table, right after the final buzzer went off, and here comes Paul Snyder, the owner of the team, going right by the press table, red as a beet. I took one look at Paul and I knew Dolph was gone," said Jim Baker, Courier-Express reporter.

"I wasn't a little disappointed by last year, I was a lot disappointed," Snyder told Sports Illustrated. "I'm used to running a business and I felt it was the right decision to let Dolph go. So I did it. After the way we played in the first game I felt I would rather sell the franchise than watch another performance like that."

John McCarthy was promoted to the position of interim head coach for the remaining 81 games in what must have been an NBA first. McCarthy had played college basketball at Canisius College and then moved to the pros for six years with three different franchises.

The team statistics were similar to Year One. Buffalo was 14-27 at home and 8-33 on the road. The Braves again did not have a winning month on the calendar. The team had a three-game winning streak to get to 6-8 on the season, but that was the high point.

The new acquisitions didn't work out badly at all. Elmore Smith had an outstanding rookie season that was generally forgotten in the years ahead. The rookie averaged 17.4 points and 15.3 rebounds per game (the latter was sixth in the league). That's particularly impressive considering the jump in competition from college. Blocked shots weren't kept yet in the NBA, but Smith certainly was a league leader there. He had 14 in one game against Portland. Smith was named to the NBA's All-Rookie Team.

"The E is beautiful to watch. He's got such grace," Hummer told Sports Illustrated during the season. "I think we're gonna have a world championship here someday. I have never seen a guy so mature at 22. He doesn't care about scoring, he doesn't fool around - he just wants to win. You should have seen him the first time against Wilt [Chamberlain]. First, Wilt grabs the ball, shoves E out of bounds and off the edge of the court and dunks it. Then E calmly goes down to the other end, gets the ball, runs right at Wilt, slams it in and then quietly walks away without saying a thing."

Hazzard was the team's third-leading scorer at 15.8 points per game, and led the team in assists. Hilton quickly established a reputation as one of the great streak shooters in league history. He would shoot from anywhere. When he got hot, he could carry the Braves by himself. When he was cold, he could take the Braves right out of a game. Considering his .389 field-goal percentage was the worst on the roster, he was cold more than he was hot.

The big surprise, though, was Randy Smith. The 6-3 rookie actually made the team as a small forward, and beat out John Hummer and others for a starting position. Smith survived mostly on athletic ability that first year, but averaged 13.4 points per game. When the Braves played the Celtics, Smith and John Havlicek seemed to be in motion for the entire game.

Kauffman's move to forward worked out fine, as he averaged almost 19 points per game and again made the All-Star Game. But other players weren't developing. Dick Garrett and Mike Davis showed signs of plateauing, while Cornell Warner and Bill Hosket were stuck on the end of the bench.

At least attendance was up, as the Braves averaged 8,557 in 1971-72, although the team may not have needed the expanded Memorial Auditorium and its 15,000-plus capacity most nights. Buffalo clearly had some talent, but a star was needed to compete with O.J. Simpson and Gil Perreault for the sports dollar in Western New York. And one was on the way.