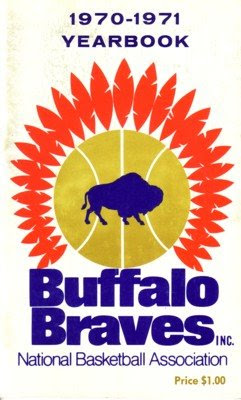 It was October 14, 1970, and the Buffalo Braves were ready to face the Cleveland Cavaliers for their first game in their history. Memorial Auditorium was not full for the occasion; attendance was 7,129. That sounds rather remarkable in hindsight since opening nights now sell out the day tickets go on sale. It's even more remarkable considering the Aud only held about 10,000 fans at that point. The building was a year away from having its roof raised and the seating capacity expanded. Tickets for that game were $6.50, $5 and $4.

The Braves had a new name on the top of the organizational chart. Paul Snyder had purchased the team the day before opening night. The firm of Newberger, Loeb and Company had thought the Braves eventually would play in a planned domed stadium in Lancaster. That idea fell through over the summer, but the firm still made a $200,000 profit in selling the Braves.

As for Snyder, he was said to be thinking about it when he attended a Braves' exhibition game in Niagara Falls, got caught up in the excitement, and completed the transaction. The local businessman, who was a former wrestler at the University of Buffalo, owned Freezer Queen foods until it merged with Nabisco.

Coach Dolph Schayes sent out a starting lineup of Dick Garrett, Herm Gilliam, Don May, John Hummer and Nate Bowman for the opener. The combination worked for a 107-92 win over the Cavs. Bowman's Buffalo career may have peaked in that game, as his jumper put Buffalo ahead for good, 12-10. May had 24 points in 35 minutes, setting a career-high in scoring. Garrett added 20, including the first basket in franchise history.

It was downhill from there for the team, though. The Braves lost their next nine games, due in part to injuries to Garrett and May. They even returned the favor to Cleveland, losing to the Cavaliers on Dec. 6, 1970, for Cleveland's first-ever victory after 12 straight losses. A crowd of 2,002 looked on.

That was pretty typical of a forgettable season. Buffalo only won 22 games in that season, and the total was a little inflated. The NBA had stacked the schedule so that the Braves played the other two expansion teams, the Cavs and the Portland Trail Blazers, 12 times each. While that was good for the won-loss record (11 of the wins came against those two teams), it wasn't good for the gate. The Braves' fans preferred to see such established teams as the New York Knicks and Boston Celtics. Buffalo never came close to a winning month, and was particularly bad on the road (6-34).

That initial team had a little talent and featured a couple of surprises. The biggest was someone who didn't start in that first game. Bob Kauffman, a former first-round pick of the Philadelphia 76ers, who eventually claimed the starting center spot. Kauffman averaged more than 20 points and 10 rebounds per game despite being slightly miscast as a center. He was Buffalo's only representative in the NBA All-Star Game. Kauffman played a big role in the Braves' first-ever win over one of the NBA's "established teams." Buffalo knocked off Atlanta, 134-118, on Nov. 11, and Kauffman had 35 points in his first start as a Brave.

May was a little small for the small forward spot, but he could shoot. The 6-foot-4 former Dayton star had one of the great fluke statistical years in NBA history. May averaged 20.2 points per game. He never averaged as much as 10 points per game for the rest of his NBA career. The big year was all about opportunity and playing time.

The other regular forward was John Hummer, who didn't have a bad rookie season. Hummer averaged 11 points and almost nine rebounds per game. His biggest problem, of course, was that he wasn't Calvin Murphy. He also was a little clumsy, and his skills weren't the obvious ones like shooting.

There wasn't much after that. Bill Hosket, a former Ohio State star, only played in 13 games due to an injury. Cornell Warner showed little offensive spark. George Wilson had one memorable moment, a ridiculously long game-winning shot in overtime to beat the Lakers, 113-111, at the Aud on Dec. 15. (The next day, Snyder spoiled the good feeling by saying he might have to move half of the team's games to Toronto.) Fred Crawford, Paul Long, Bowman and Mike Silliman were rarely in the regular rotation. Oddly, Donovan didn't make a single roster move during the entire season.

Bowman, at least, had one remarkable moment. He supposedly brought a gun to practice one day with the intention of shooting Schayes. He was released at the end of the season, played in the American Basketball Association the next year, and dropped out of basketball.

Buffalo finished 30 games out of first place, and averaged under 5,000 fans per home game. There weren't many highlights, as could be imagined. On December 1, Kauffman and Boston's Dave Cowens engaged in fight that left Cowens with a shiner. Art Williams hit the winning shot for Boston in a 117-116 win. On December 4, the Braves stunned the World Champion New York Knicks, 97-91, disappointing the many New York fans studying in local colleges who came down to see their heroes. Dave DeBusschere did not score a point in the game for the Knicks.

The comparisons between the Braves and the NHL's Sabres were easy and one-sided. Buffalo was selling out every game by the second half of the season, and had a cornerstone in the franchise's development in rookie Gil Perreault.

The Braves, facing a more balanced schedule, needed some new faces. They arrived in large quantities.